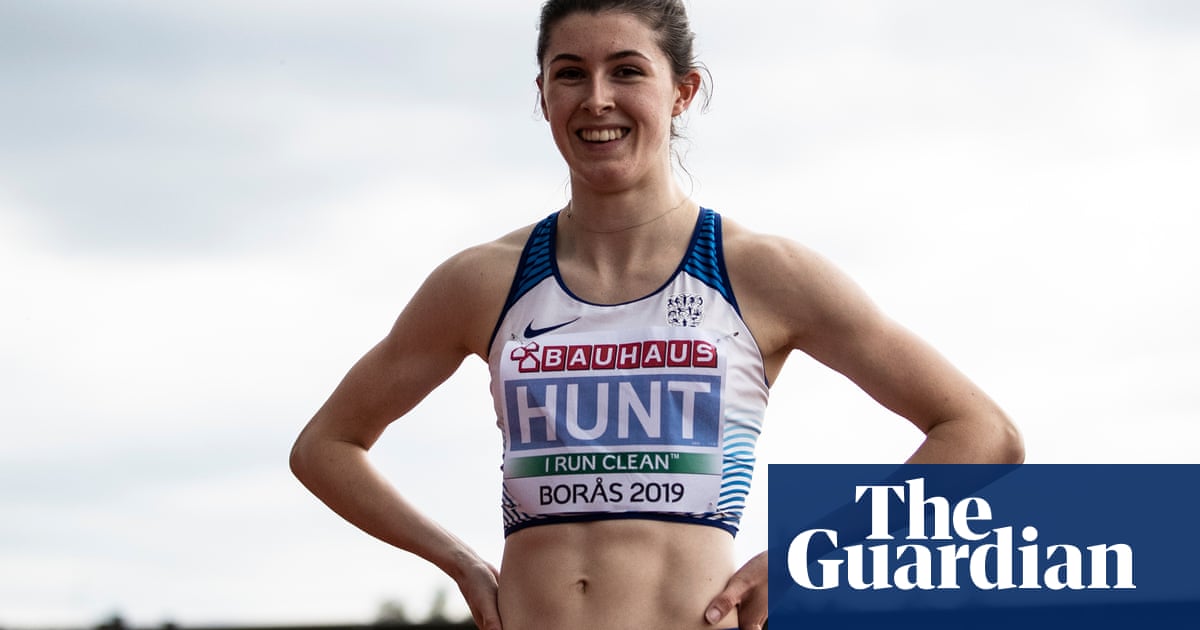 Barely a month after her 17th birthday last summer, the British sprinter Amy Hunt ran a 200 metres so fast that her spikes were actually smouldering as she crossed the finish line. And so, emphatically, were the record books. Hunt’s time of 22.42 secs in Mannheim in June not only broke the women’s Under-18 world record – the men’s version is held by a certain Usain Bolt – and was the third fastest ever by a British woman, but it would have also won a bronze medal behind Dina Asher-Smith at the recent world championships.

“It was 39c that day in Germany and honestly my feet were so hot that my spikes melted a little,” says Hunt, laughing. “It was my overriding memory. I don’t remember what happened between 50m and 150m – it was all a bit of a blur. Afterwards I went back and told my coach that I never believed I would run a time like that, but he immediately replied that I did!”

As for those comparisons with Bolt, Hunt modestly says it is too early to draw any conclusions. “It’s just incredible to think that at my age I am on a par with him and hopefully I can go on to achieve the same sort of success,” she adds.

But Hunt is clearly a special talent. On the track a whirlwind 2019 ended with Hunt winning a European Under-20 gold medal, being named young female athlete of the year by the British Athletics Writers Association and getting snapped up by the blue-chip sports agency that represents Katarina Johnson-Thompson and Laura Muir.

Off it, the A-Level student from Nottinghamshire was recently offered a place at the University of Cambridge to study English – her favourite authors are Charlotte Bronte, Henry James and Chaucer – while also finding the time to play the cello to grade six standard.

Hunt, though, is confident she can juggle academia with life as a professional athlete – as Asher-Smith did early in her career – and eventually challenge for world and Olympic titles.

“If you are going to put that much hard work and effort into something, you have to be very clear about why you are doing it and what you are working towards,” she says. “And I am training to one day become Olympic champion. But my team and I know that I have to be really sensible about progressions, and not try to do everything all at once.”

Hunt missed the opportunity to qualify for the 2019 world championships due to a minor injury. However she has fully recovered and believes she will be stronger this season after a good winter in the gym.

On Saturday she takes another step in her fledgling career when she faces the 100m world champion, Shelly-Ann Fraser-Pryce, and the world indoor champion, Murielle Ahouré, over 60m at the Glasgow indoor grand prix.

“In terms of profile, this is probably the biggest race of my career,” she says. “It will be really surreal to be racing Shelly-Ann because she has been one of those huge idols that I have looked up to since I was a young child.”

That is certainly true given Hunt was only five when the Jamaican won her first Olympic title in 2008. However she insists she won’t be overawed. “My number one target is to enjoy it, embrace everything, and live in the moment. That’s what I did last year in Mannheim and it worked really well.”

Might another personal best be on the cards? “Hopefully. My coach and I are expecting to run something fast.”

Whatever happens it will put her in good stead for a year that will involve a crack at the world junior championships and, if she qualifies, potentially the Tokyo Olympics.

“I am doing my A-levels this year, and that is pretty important for me,” she says. “And competition-wise we are looking towards world juniors first. Obviously it is an Olympic year too so we are definitely not ruling that out. But I know I can’t rely on times you have run in the past. I have to go out and replicate them.”

Another dilemma Hunt faces is whether to go to Cambridge or Loughborough for university this autumn, a decision complicated by the fact she already trains at Loughborough. “I am not sure what I will do yet,” she admits. “There’s a lot of logistics to work out – it is a bit of a tough one given Cambridge is about an hour and thirty minute drive away.”

It’s a nice choice to have, as she concedes, before revealing that things could have easily turned out differently. When she first joined an athletics club she was originally “shoved into the middle distance group”.

“Because I was tall, lanky and spindly they told me I wasn’t going to be a sprinter even though I told them I was quick and the school had sent me,” Hunt laughs. “But by the end of the year I was top of the under-13 rankings without really doing any serious training. That made me think that athletics was something I could go into – and the following year I won the English schools championships.”

What kind of cross-country runner was she? “I did it for a couple of years – I think I made it to Anglians but I never made it to English schools,” she admits. “I hated every second!”

Luckily life in the fast lane has proved much more to Hunt’s liking.

The Guardian Life story books can help adopted children understand their past, but are often not prioritised by social workers Baby Charlie* was unable to live with his birth family, but they were determined that he would know where he came from. Although it was sometimes painful, Charlie’s birth mother and his maternal birth grandparents […]

The Guardian Presenter ‘devastated’ by move, which is part of wider changes to be unveiled next week Victoria Derbyshire only found out about the axing of her award-winning BBC show via media reports, she has revealed in a series of tweets in which she also said she was “absolutely devastated” by news of its demise. […]

The Guardian Swarms of desert locusts, which have been ravaging crops and grazing land across east Africa, have now crossed the border into South Sudan, a country already struggling from widespread hunger and years of civil war. The UN has warned that an imminent second hatch of the insects could threaten the food security of […]