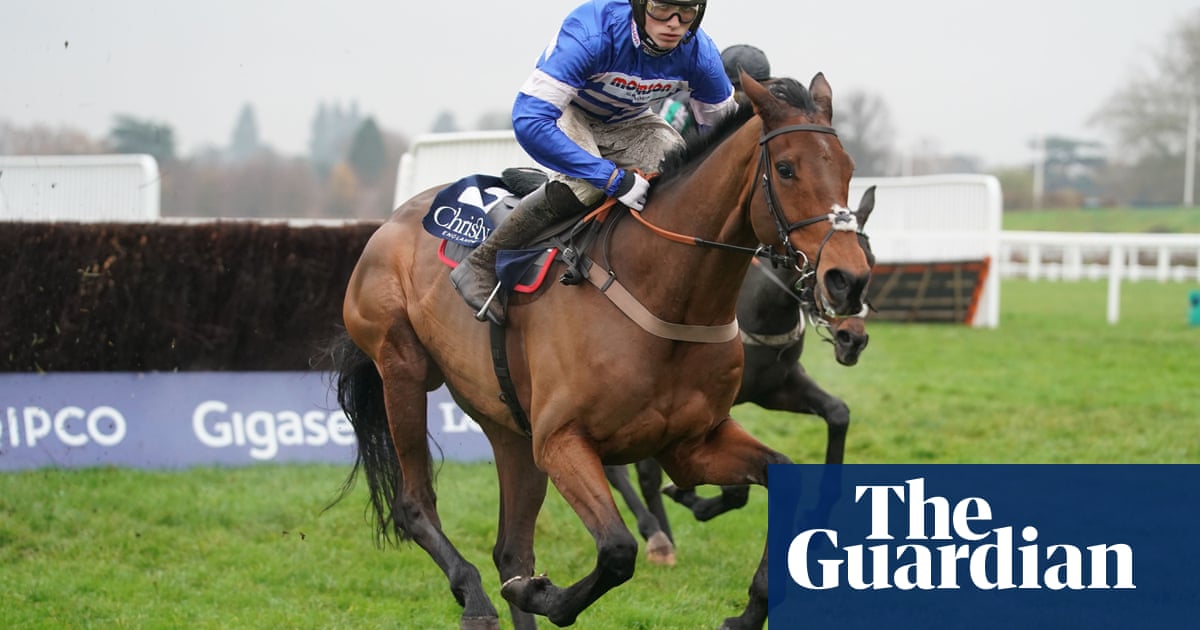 Last weekend’s impressive win by Altior was a reminder of just what Cyrname achieved in November when he became the first and, so far, only horse to beat that champion over obstacles. Cyrname (3.35) was himself beaten when he stepped up in distance on Boxing Day but there is no shame whatever in running second in a King George.

He returns to his happiest hunting ground for Saturday’s big race, the Ascot Chase, and it is hard to see why he should not win it as he did last year.

Riders Onthe Storm is a big talent and a real contender for next month’s Ryanair but he is taking on a monster in his own back yard.

1.50 Ascot This is a very finely balanced Reynoldstown in which narrow preference is for the youngest in the field, Copperhead. A rapid improver since being switched to fences, he had masses in hand when landing the Mandarin last time and may be able to outbattle Pym, for all that he would be getting more weight from that one in a handicap.

2.05 Haydock A somewhat fortuitous winner of the Long Walk, dropped in his lap by a misbehaving rival, The Worlds End faces a tough task in conceding weight all round here. But he appeals as the most reliable prospect in the field, since his main rival, Emitom, is sure to make at least one jumping error.

2.25 Ascot Regal Encore is the course specialist but, at the age of 12, it is asking a lot for him to repeat his Christmas heroics. The progressive Captain Drake beat a useful rival on New Year’s Day and can take another step forward on just his fourth try over fences.

2.45 Wincanton Paul Nicholls dominates at this track but, surprisingly, has just one Kingwell success to his name since 2004. Quel Destin may improve his tally, having caused a minor surprise in beating Call Me Lord at Sandown a fortnight ago. Song For Someone is a contender on his latest effort but he was allowed the run of the race that day.

3.00 Ascot It was a career-best effort from Myplaceatmidnight to be second at Taunton last time. Both the winner and the fifth have won since and he should go close here with Jonjo O’Neill Jr aboard for the first time.

3.15 Haydock One For Arthur has dropped to a handy mark and it will be interesting to see if the wind operation and cheekpieces help him into contention. But the younger Lord Du Mesnil has won his last three and has more to offer, judged on his nine-length defeat of Perfect Candidate here in December. Yala Enki should go well, having not been raised for his Taunton success.

A weaponised hell-run of selfie-taking: my journey into the heart of the Baftas | Stuart Heritage

The Guardian Surely the Baftas couldn’t be as bad as they look on TV? The Guardian’s intrepid reporter hit the red carpet to find out Not so long ago, I made plans to attend the Oscars. Whenever I mentioned this to people, you could measure their excitement in decibels. They’d scream. They’d shake. They’d generally […]

Eminem compares himself to Manchester Arena bomber on new track

Belsen: Our Story review – the Nazi horrors that must never be forgotten

The Guardian As the Holocaust ebbs from living memory, survivors of the notorious concentration camp underscore the importance of remembrance in this remarkable documentary Belsen: Our Story (BBC Two) is difficult to watch, but as many people should watch it as possible. Over one hour, this sober and simple film, unsparingly matter-of-fact, uses archival audio […]