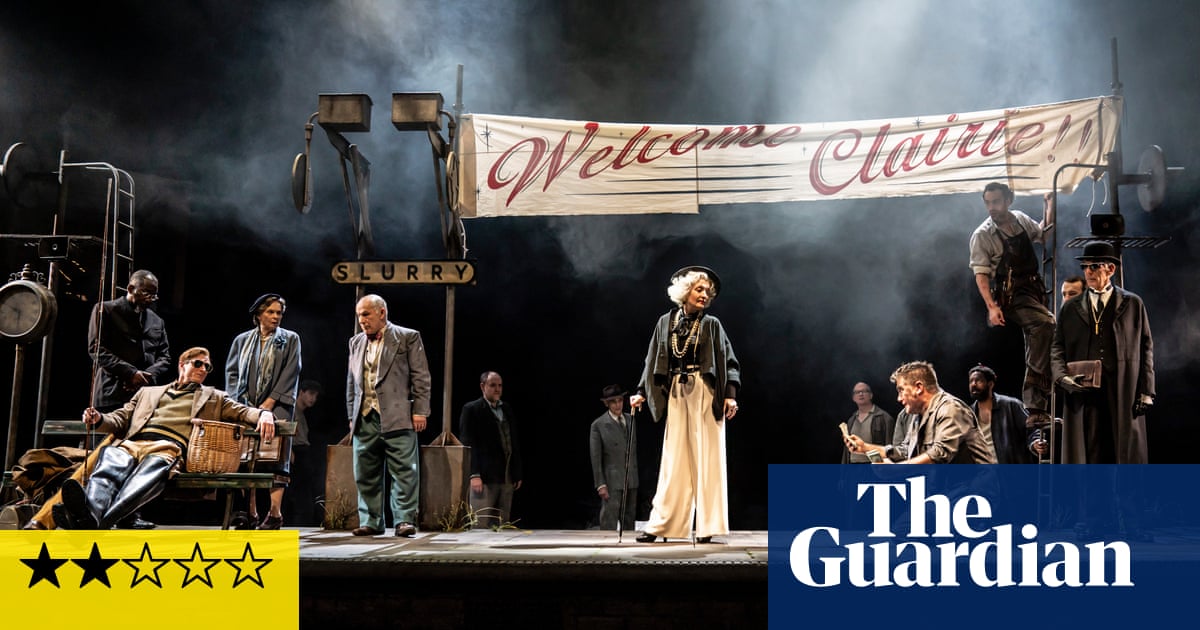 The Visit (or The Old Lady Comes to Call) is a 1956 tragicomedy that has shades of ancient Greek drama alongside its laughter. A billionaire visits her hometown, 45 years after leaving, to settle old scores with a former beau who served her a grievous injustice. Claire is both a prodigal daughter, returning with riches, and an avenging Greek fury who offers the down-at-heel town a transformation of its fortunes in exchange for her murderous revenge.

Tony Kushner’s adaptation transposes the original setting of Friedrich Dürrenmatt’s play from central Europe to an American backwater, aptly called Slurry, which is reminiscent of the tumbleweed landscapes from a Coen brothers film in its evocative opening scene at a decrepit railway station.

Lesley Manville, as Claire, is inspired casting: she excels at the role of the charming villain and prototype feminist avenger, channelling Bette Davis in her haughty disdain, 1950s glamour and acerbic one-liners: “You look like you’ve swallowed a hatbox,” she tells one townswoman who is dressed up.

Jeremy Herrin’s production pulls out all the stops in its scale and aesthetics: Vicki Mortimer’s design is lavish with exquisite, atmospheric sets, from romantically lit woodland to a cemetery. The cast is large – including a 30-strong choir – and their poised, choreographed movements give the production a sense of a musical without the song and dance.

In Kushner’s hands, however, Dürrenmatt’s brisk script mushrooms into a production that is almost four hours long with two intervals. It takes on a portentousness and the overall effect is of slow, soporific drama that lacks chemistry in its cast.

Perhaps because of its length and plodding pace, it fails to conjure the tautness that is vital to make the story work. Claire’s former lover, Alfred Ill, is played by Hugo Weaving as an unremarkable man in the throes of rising panic. Weaving’s performance feels bland and cannot match Manville’s; he leaves us feeling little for Alfred though he speaks repeatedly of his terror as the town shows signs of its murderous mob mentality. This aspect of the play has shadows of Shirley Jackson’s iconic New Yorker story The Lottery, written less than a decade before Dürrenmatt’s play, but again we feel no building tension.

There is gentle humour and some kookiness but the play tends to flag whenever Manville is not on stage. “Nothing could harm this comedy with a tragic end more than heavy seriousness,” wrote Dürrenmatt in the postscript to his play. This adaptation, for all its grandness, feels crushingly heavy by the end.

The Guardian Rolling coverage of the day’s political developments as they happen, including Boris Johnson’s speech on Brexit trade talks with EU, and Michel Barnier publishing EU’s draft negotiating guidelines 9.48am GMT No 10 released some extracts from Boris Johnson’s speech on the UK-EU trade talks overnight. Here are the key points. There is no […]

Woman posed as boy to sexually assault up to 50 girls, say police

The Guardian A woman posed as a teenage boy to sexually assault up to 50 girls as young as 14 after grooming them online, police have revealed. Gemma Watts, 21, travelled the country by train to meet the youngsters, who believed they were in a relationship with a boy close to their own age. Disguised […]