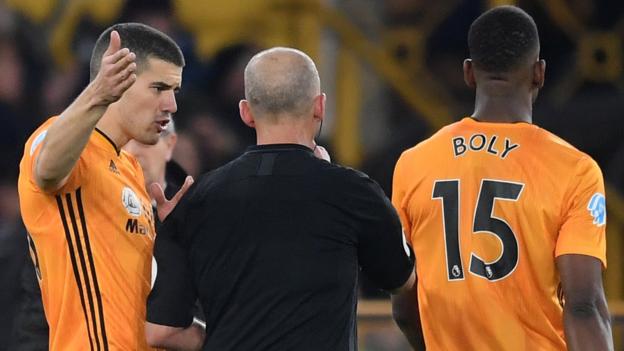 Wolves missed out on the chance to close the gap on the top four as they were held to a goalless draw by 10-man Leicester City amid more VAR controversy.

Just before half-time, a Wily Boly header was disallowed as VAR ruled Pedro Neto’s heel to be offside as he collected Jonny’s lay-off after taking a corner.

In a scrappy, tight game chances were at a premium with Leicester’s best coming when Caglar Soyuncu headed straight at Rui Patricio.

Brendan Rodgers’ side were reduced to 10 men with 15 minutes remaining when midfielder Hamza Choudhury was sent off for his second bookable offence after slipping and bringing down Leander Dendoncker with his trailing leg.

The former Liverpool manager made an attacking change in an attempt to win the match but it was Wolves who came closest when an unmarked Raul Jimenez headed narrowly wide from a corner.

The draw sees Wolves to seventh, five points off Chelsea in fourth, while Leicester remain third, one point behind Manchester City in second and 11 clear of Sheffield United in fifth.

China is getting smarter – but at what cost?

BBC News – Home Image copyright Getty Images Image caption Shenzhen has grown into a futuristic city in just 30 years Thirty years ago, Shenzhen was a fishing village, surrounded by paddy fields. Then came a plan to build China’s first special economic zone to allow foreign investments, and out of the quiet rural landscape […]

BBC News – Home After process mired in chaos, Pete Buttigieg takes narrow lead in Iowa caucuses, early results show This breaking news story is being updated and more details will be published shortly. Please refresh the page for the fullest version. You can receive Breaking News on a smartphone or tablet via the BBC […]

BBC News – Home Image copyright Getty Images The man in charge of next week’s giant CES tech expo has said that Ivanka Trump has done “great work” and will help it focus attendees’ minds on job-related issues for the future. A decision to offer the US President’s daughter one of the show’s “keynote” sessions […]