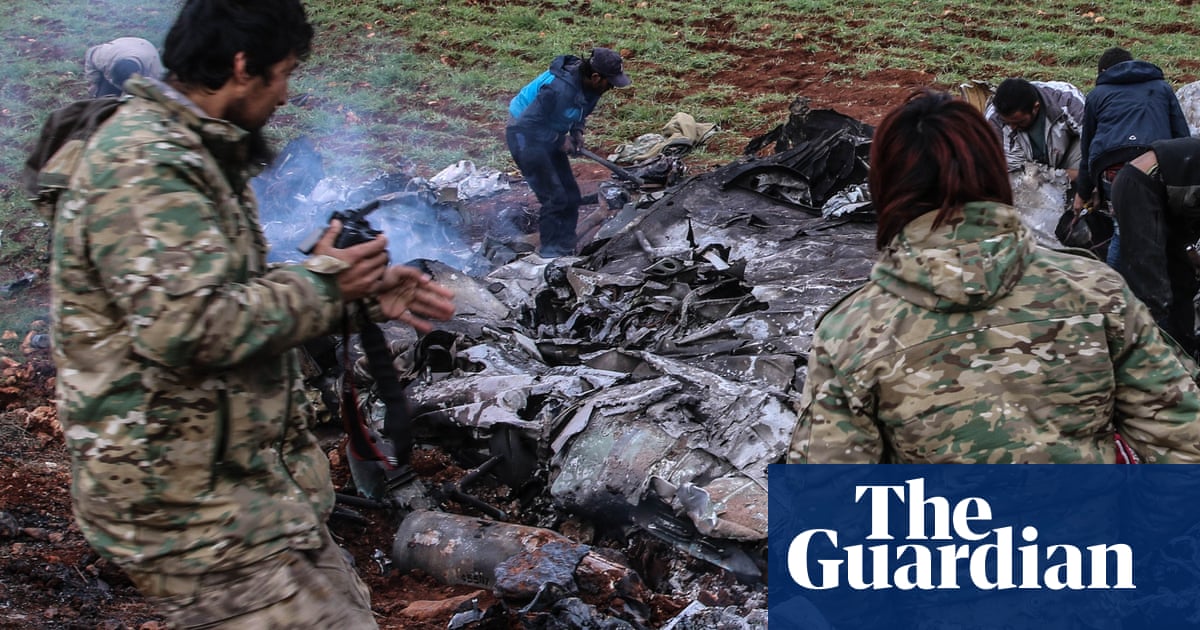 A Syrian military helicopter has been shot down over the last major rebel bastion in the northwest of the country, the second such incident in a week of high tensions with neighbouring Turkey.

The attack on Friday in a region where Turkish troops and Russian-backed government forces have engaged in multiple clashes came as Washington urged Ankara to look to its western allies in light of Moscow’s actions.

Syrian and Russian forces have conducted a deadly offensive against the shrinking pocket in the country’s northwest since December, claiming the lives of eight civilians on Friday.

The Guardian view on Idlib: nowhere left to run | Editorial

“At approximately 1:40pm (local time), one of our military helicopters was hit by a hostile missile in the western countryside of Aleppo,” Syrian state news agency SANA said.

“This led the helicopter to crash, killing all crew on board.”

It said the aircraft was downed near the town of Urum al-Kubra, where Turkey-backed rebels operate, but did not say who fired the missile.

The Syrian Observatory for Human Rights said the helicopter’s two pilots were killed.

Turkish media blamed that attack on rebels, but the Observatory said Ankara’s troops had fired rockets at the aircraft over the village of Qaminas, southeast of Idlib city.

Turkey did not claim responsibility.

Since December, Syrian government forces have undertaken a blistering assault on the last major rebel pocket in the northwestern Idlib region and parts of neighbouring Aleppo and Latakia provinces.

The Observatory said eight civilians, including three children, were killed in the bombardment on Friday, adding that five died in Russian raids near the almost deserted city of Atareb.

Government forces are within 5km of the city, the monitor said.

The assault has sparked the largest wave of displacement in the nine-year conflict, with 800,000 people fleeing since December, according to the United Nations. Among them, some 82,000 people are sleeping rough in sub-zero temperatures.

European members of the UN Security Council called Friday for an immediate end to the Idlib offensive to save lives.

US, Syrian and Russian forces involved in deadly checkpoint clash

“We demand that the parties, especially the Syrian regime and its allies, immediately end their military offensive, establish a genuine and lasting ceasefire,” said permanent member France and non-permanent members Belgium, Estonia and Germany.

“There can be no sustainable military solution to the Syrian conflict,” they said in a joint statement.

The unprecedented exodus of civilians has triggered alarm in Turkey, which fears an influx across its border.

Turkey first sent troops to Syria in 2016 and has sent reinforcements to the northwest in recent weeks to contain the assault.

That has led to a series of confrontations, including deadly clashes this week that saw government shelling kill five Turkish troops.

The Guardian Canadian has the most international goals in women’s or men’s football and her tally – 186 and counting – looks unbeatable It was a long time coming. A slow climb. Many expected the Canada striker Christine Sinclair to break the USA legend Abby Wambach’s record of 184 international goals at the World Cup […]

What will Brexit mean for your money? Key questions answered

The Guardian From pensions to studying, here’s what will happen after the UK leaves at 11pm on Friday It finally happens at 11pm on 31 January. The UK will no longer formally be a part of the European Union, a moment that is likely to prove emotional for many, whichever side of the debate you […]

The Guardian Australia remain on track to finish off their perfect summer, going to stumps on day three of the third Test 40-0 and leading New Zealand by 243 runs. That advantage owes much to Nathan Lyon who claimed his 17th five-wicket haul to help dismiss New Zealand for 251 in their first innings, in […]